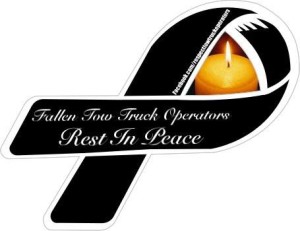 I remember the first time I met tow operator Blake Gresham. I meet a lot of people, especially tow drivers, so the fact that I remember meeting Blake as clearly as I do is a testament to the person he was. We were at City Hall discussing new tow regulations. Not exactly the kind of place you would expect to see an 18-year-old kid with a big smile on his face. But Blake was young, and smiling and happy. He seemed happy to be a tow operator and happy to help his dad run the family busi- ness, GT Towing in Smithville, Mo.

A few weeks later, on August 27, 2012, Blake was killed while helping a stranded motorist on the side of the roadway.

Blake’s death was a tragedy. However, even more tragic, the story of a tow operator killed in the line of duty seems to be commonplace these days. Reports estimate that there were in excess of 30 towers killed in the line of duty in 2012 alone. A few weeks after Blake was killed, tow operator William Houck was killed in Ohio as he was hooking a disabled car. That same day, another Ohio tow truck driver was hit and injured while changing a tire. One month later, tow operator Faapuna Manu was killed while assisting a stranded motorist in California. A few weeks after that, tow operator Jason Halstead was killed while assisting a motorist in Wash- ington.

There are laws in place designed to protect tow operators and other emergency personnel working on the roadways. These “Move Over Laws” typically require motorists to move over and change lanes or, at a minimum, slow down when they observe an emergency vehicle. Move Over Laws are nothing new. In 1994, paramedic James Gar- cia was struck and injured while as- sisting an individual in South Caro- lina. When Garcia (as opposed to the striking motorist) was found at fault, South Carolina became one of the first states to pass a Move Over Law. Since then, 49 states have passed Move Over Laws.

Missouri’s Move Over Law is pretty typical. It states that “upon approaching a stationary vehicle displaying red or red and blue lights … the driver of every motor vehicle shall (1) proceed with due caution and yield the right of way, if possible with due regard to safety and traffic conditions, by making a lane change into a lane not adjacent to that of the stationary vehicle … or (2) proceed with due caution and reduce the speed of the vehicle, maintaining a safe speed for road conditions, if changing lanes would be unsafe or impossible.” Fortunately, Missouri’s Move Over Law specifically includes tow trucks and wreckers within the law. Missouri is not alone in protecting tow truck operators, many other states also offer towers this protection.

However, some states do not specifically include towing and re-covery vehicles and instead require oncoming vehicles to move over or slow down only when approaching “emergency vehicles.” Whether a tow truck qualifies as an “emergency vehicle” often times leads to confusing, and conflicting, opinions.

Regardless of whether a state’s Move Over Law specifically includes tow operators, one thing is certain: tow operators continue to die in the line of duty. Dave Vaughn of D & A Towing stated that after the recent accidents involving the Ohio tow truck operators that “It’s no exaggeration that every night when I go home and open up the ‘tow411’ web-site, another driver has been hit or killed somewhere on the side of the road trying to do their job.” Vaughn says that many Ohio drivers ignore the Move Over Law and instead move closer to an accident scene so curious drivers can observe what happened.

The only obvious fix to this growing problem is to increase awareness for Move Over Laws and the risks that tow operators face ev-ery day on the roadway. James and Amy Gresham, Blake’s parents and owners of GT Tow, have founded a non-profit entity called “Move Over For Blake” in hopes of doing exactly this. Since Blake’s death in August, the Greshams have visited tow shows and held other events selling “Move Over For Blake” merchandise. Information regarding purchasing these materials can be obtained by emailing Amy Gresham at moveoverforblake@gmail.com. All of the profits from the sale of “Move Over for Blake” merchandise will be used to promote the Move Over Law and raise public safety awareness for towers and other emergency personnel on the roadways.

In the meantime, encourage everyone to Move Over for Blake and the families of all the other tow operators and emergency personnel working on our roadways.